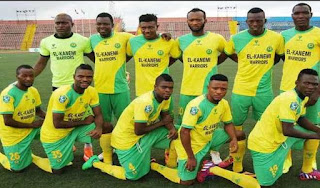 Plateau United have swung into action in a bid for five players which includes FC IfeanyiUbah’s King Osanga and the duo of Rangers’ Charles Henlong and Orji Okagbue Kalu.

Also on the Jos side radar are Chinedu Udechukwu of Katsina United and Raphael Ayagwa from Lobi Stars.

Plateau United who emerged champions of the 2016/17 Nigeria Professional Football League (NPFL), ahead of the Lagos based MFM and Enyimba international to second and third places respectively will represent Nigeria in the 2018 CAF Champions League.
The bid which has been logged in the Domestic Transfer Matching System (DTMS) is awaiting response from the respective clubs or clearance from the Football Federation depending on the individual player’s status.

Henlong joined Rangers from Kano Pillars at the start of last season having moved to Kano following the expulsion of Giwa FC from the league.