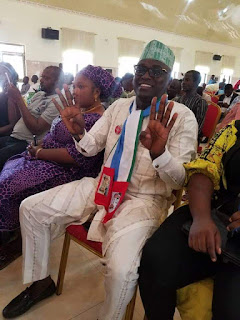 Since the suspension of embergo on campaigns by INEC, we have seen how candidates aspiring for elective positions went for broke, canvassing for support using all sorts of tactics to sway voters key into what they have to offer and vote for them on election day.

The battle for Plateau North Senatorial District is not exception as it thrusted three major contenders viz; Hon. I.D Gyang of PDP, Hon Sama'ila Mohammed of PRP and Hon. Rufus Bature of APC.

Amongst these three contestants, Hon Rufus Bature is the only candidate that traversed the length and breadth of Northern Plateau Senatorial District to canvass for support from electorates irrespective of their tribe and religion.

All things being equal, the choice before us is between Justice and bigotry, fair play and foul play, unity of purpose and disintegration in tatters, all inclusiveness and divisiveness.

As for me, my immediate family and all voters I can influence, I have chosen to get involved.

I'd vote Hon Rufus D Bature for Senate even if I wasn't a Chieftain and card carrying member of APC in order to set free my conscience from bondage.