Gamai Unity And Development Organization (GUDO) Kicks Against Any Attempt Of Short Changing Justice Monica Mensem Dongban JCA As President Of The Court Of Appeal... 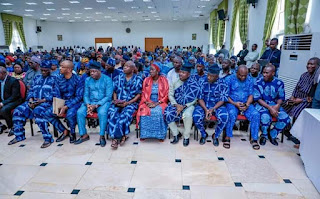 PRESS RELEASE
POSITION OF THE GAMAI UNITY AND DEVELOPMENT ORGANISATION (GUDO) ON THE ATTEMPT TO SHORT-CHANGE JUSTICE MONICA MENSEM-DONGBAN, JCA AS PRESIDENT OF THE COURT OF APPEAL.
The attention of the Gamai Unity and Development Organisation (GUDO) has been drawn to the controversy trailing the recent invitation of our illustrious daughter Justice Monica Bolnaan Mensem-Dongban and Justice of the Court of Appeal by the National Judicial Council (NJC) for interview to the Supreme Court. We have received this news with mixed feelings and reservations in view of the glaring ulterior motives behind the exercise. We are compelled, on behalf of the entire Gamai people both at home and in the Diaspora, to speak strongly against what appears to be a grand design to short-change our illustrious daughter who has served and is still serving this country meritoriously at the Enugu Division of the Court of Appeal.
2. We feel constrained to voice out against this unwholesome politicisation and unabashed violation of the established tradition of succession to the Presidency of the Court of Appeal for which Justice Dongban-Mensem is eminently qualified and payed her due impeccably.
3. It is already a well-known fact that Justice Monica Dongban-Mensem, is the next most senior Justice of the Court of Appeal after Justice Zainab Bulkachuwa who is due for retirement at the end of this year. Indeed Justice Dongban-Mensem, as is the practice, is expected to replace Justice Bulkachuwa as President of the Court of Appeal. What is most worrisome to us is the emerging arm-twisting by certain vested interests driven by unpatriotic and narrow interests to craftily elevate her to the Supreme Court in order to pave the way for their preferred choice to assume Presidency of the Court of Appeal at the expense of our illustrious daughter who is next in line for the exalted post. This is a plot that is already being interpreted in negative terms by a wide spectrum of Nigerians.
4. Details about these orchestrated and subterranean moves are already in the public domain, and the dire consequences of such actions on the integrity of the judiciary and our national unity are rearing their heads. It is our strong belief that the National Judicial Council shall be setting a bad precedence which is capable of demeaning the status of the judiciary and compromising its integrity as the hallowed temple of justice. Such subterfuge is also a bad omen, with great potentials to undermine the much-clamoured good governance and rule of law of this administration. It is indeed sad that the judiciary which should be insulated from politicking is being consciously or unconscionably dragged into mundane politics of sentiments to the detriment of our national interest!
5. In conclusion, having made our position clear and unequivocal on this issue, we are passionately appealing to the National Judicial Council to resist this subtarrenean invitation to judicial anarchy and the immolation of trust by shelving the planned interview of Justice Monica Dongban-Mensem and if done, toe the path of honour and sanity, by adhering strictly to the established rule of succession at the Court of Appeal through confirming Justice Monica Dongbam as the next President of the Court of Appeal as Justice Zainab Bulkachuwa retires at the end of the year. We are also appealing to President Muhammadu Buhari, The National Assemblt, all men and women of good conscience, those on the Bench and at the Bar, political leaders, Civil Society and other stakeholders to lend their voice against this dangerous precedence and act of impunity that is capable of derailing the most cherished sanctity of the judiciary in the dispensation of Justice in the country.
Thanks and God Bless
Fidelis Damsuk Bitkop
Secretary General