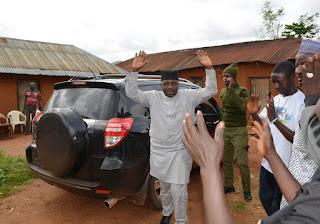 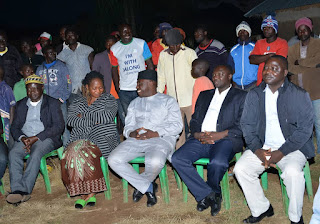 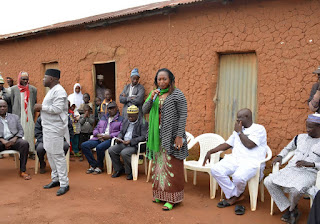 In every clime, political campaigns are often rigorous. The process entails going Ward to Ward, settlement to settlement, street to street, door to door and man to man in a bid to  garner the support of the electorates. In the same fashion, Hon. Usaini Amurudu design the template for his Thank You Tour.

For the  past one week; the Honourable Member Representing Bokkos constituency in the 9th Plateau state house of Assembly has been so busy criss crossing the length and breadth of his  Constituency to hear the demands and thank the people who repose confidence in him as demonstrated at the polls.

As a cultured young man and a true son of the soil who values the ideals of the land, Amurudu lead the entourage to the palaces of the traditional rulers who are the custodians of the culture and tradition of  the localities visited to pay homage and seek royal blessings through prayers before proceeding to meet the people. A gesture which earned him a name THE WISE ONE by a renown traditional ruler.

In all the places visited; The appreciative crowd from all walks of life devoid of political leanings trooped out in their numbers to welcome Hon. Amurudu. They were elated by the unprecedented symbiotic relationship established by Amurudu between him and his constituents. Saying; it is very unusual for a political office holder to abandoned all the comforts and privileges ascribed to a Honorable and  always be with the people at the grassroots especially when election is not near. Amurudu responds saying nothing is too much for the people who share in his dreams by investing their time, energy, resources and queue up under scorching sun to vote him. So the only way to reciprocate the gesture is to give uncommon representation and continue to hold the people in high esteem. Hence the sustenance of an effective feedback mechanism.

The people of Bokkos Constituency acknowledged his robust contributions on the floor of the house, prompt response to the plight of the downtrodden as well as his relentless efforts to ensure physical  infrastructural development which is instrumental in his elevation as the  Chairman House committee on works and transport.

Elder Silas Wallams from Kwatas Ward thanked Hon. Usaini Amurudu for sinking Borehole in their community even before becoming a member of the house of Assembly and express confidence that he will do more.

The general consensus of the good people of Bokkos constituency is continues support and prayers to God to guide and protect Hon. Usaini Amurudu in all his endeavors.