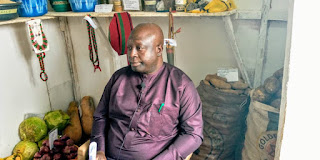 The Management Committee Chairman of Barkin Ladi LGC, Hon. Barr. Ezekiel Mandyau has called on investors to take advantage of the mineral deposits available in the   LGA and invest as the untapped resources will promote economic potential of the state if properly harness
.
Barr. Mandyau stated this in an exclusive interview with our correspondent at the Jos ,Polo 2019 Trade Fair for Northern zone of Plateau state Day celebration .

According to him ,Barkin Ladi remain   bless  with the abundant human and material resources which need to be tapped for the growth of the Area, State and Nation.

He called on investors to come in especially in the area of  agricultural and tourism potentials as well as mineral deposits if properly harnessed ,we are capable of reducing the overbearing dependence on oil.

Barr. Mandyau reiterated that Barkin Ladi LGA is the most tourism endowed in the State ,the council enjoy farmers ,businessmen to see themselves as agent of transformation .

Adding ," if the socioeconomic activities of the area are boosted the people  will have multiplier effect on the revenue of the area and State at large".

He stressed that  the people of the area are peaceful,so the management had concluded arrangement to embark on peace mission to all the districts under Barkin Ladi to create awareness campaign for them to see the need in supporting government to achieve peace.

The Council boss emphasized that considering issue  of the insecurity that has bedevilled the area, he  thanked God Almighty  for the relative peace which is  being enjoyed under Lalong government because he has continued to preach the message of peaceful coexistence amongst the diverse people of state.

Barr. Mandyau applauded  Gov. Lalong for his tireless efforts and his  constant roles he is playing in  the restoration of peace through   Peace Building Agency towards sustainable peace in Barkin Ladi LGA and the State at large.

He said he will be embarking on peace tour in all the Districts in Barkin Ladi LGA (Gashish, Ropp, Foron, Fan & Heipang) in order to engage the key stakeholders towards achieving enduring peace.

Ezekiel admonished the people to embrace peace saying no meaningful progress or  development can take place in an atmosphere of hostility .

He thanked the people of Barkin Ladi LGA for the monumental supports being accorded him since he assumed office following his appointment by the Executive Governor of Plateau State, Rt. Hon. Simon Lalong.


Barr. Mandyau  said he has greater strategies toward partnership with the people and organizations for the development of the Local Government Area.

He said he is ready to engage with the people and come up with better plans for the unity, peace, progress and development of the area within the period he will be superintending the affairs of the Council.