Why We Must Continue To Stay Peacefully- Gov Lalong... 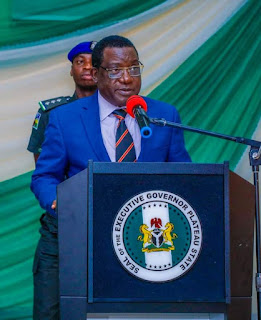 Governor Simon Lalong of Plateau State has expressed his determination to promote peaceful co-existence in the state .

"Peace remains fundamental to any form of development and we are ready to do everything possible to return Plateau State to its rightful position as the Home of Peace and Tourism."

He made this known  , while declaring open a retreat for members of the State Executive Council  which took place at the National Institute of Policy and Strategic Studies (NIPSS ).
.


Plateau had been in the news for the wrong reasons in  the past as ethno-religious conflicts that claimed hundreds of lives in 2001 .

The deadliest of this phenomenon is the near frequent clashes between farmers and herders, which have claimed several lives, displacing entire communities in different parts of the State and widening the gap for intercommunication.

On assumption of office ,Lalong immediately set up a peacebuilding agency to put an end to the conflicts and ensure lasting peace .

In his words "It is also my hope that when this retreat is over, the issue of sustaining peace and security on the Plateau would have been exhaustively dealt with as you prepare to continue to giving the right kind of leadership to the entire workforce."

"Let me again emphasize that our Next Level Agenda is anchored on a three-pillar policy thrust namely Peace, Security, and good governance,Physical Infrastructural Development, and Sustainable Economic Re-birth."
" For many of our citizens, the question on their minds are; what do these policy objectives mean? How will they impact positively on their living standards? How soon will they begin to see the manifest and tangible evidence of this vision?"
I therefore expect that this retreat will take a broad look at the State of the Economy of Plateau State and discuss the plans to reposition it in line with the Economic Rebirth Vision of the Rescue Administration.

Let me emphasize that boosting the State’s revenue generation capacity, strengthening partnerships and other aspects that are captured within the MDAs’ Medium Term Sector Strategy (MTSS) as well as the Medium Term Revenue Framework (MTRF) should be exhaustively discussed at this retreat.


I also expect that in this retreat, issues relating to planning, monitoring and evaluation will receive the needed attention. As a government, we cannot afford to waste valuable time and resources nor condone the culture of waste that denies our people good life. Peace remains fundamental to any form of development

Very soon, we shall be hosting an Economic and Investment Summit. We hope that the outcome of this retreat will facilitate the process and enable us to be more surgical in engaging the business world and marketing the potentials of our dear state to the rest of the world.

Our correspondent reports that 21 state commissioners, permanent secretaries, among others participated in the retreat with the theme “New Initiatives for Sustaining the Rescue Agenda to the Next Level.”