* Insists criminality has neither tribe nor religion 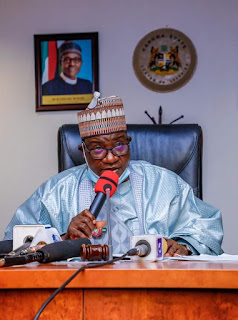 A Non-Governmental Group, Coalition For Truth, Justice and Peace has risen to the defence of Governor of Plateau State,  Simon  Lalong, and Chairman, Northern States Governors Forum, over comments attributed to him during an interview on Channels TV, Sunrise Daily on Tuesday 23 February, 2021 where he bared his mind on security challenges bedevilling the nation particularly herdsmen bearing arms.

In the said interview, the Governor was alleged to have said that not only herdsmen carry AK-47 as even some farmers also carry arms to protect themselves from the failure of the nation's security architecture to protect them.

The Governor's comments appear to have raised dust among social media users particularly on the Plateau with many quoting portions of the appearance to lash out at the Governor.

However the Executive Director of the Coalition for Truth, Peace and Justice Comrade Ayuba Zion Garba in a statement made available to newsmen in Jos  said the group was solidly behind the Governor who according to them spoke the truth and nothing but the truth.

He said, "It is unfortunate that the comments of the Governor which were spoken in truth and in pursuance of lasting solution, were taken out of context by people who have pre-concieved motives and do not see beyond their noses. We are not surprised that the issues raised generated discourse unnecessarily.

Notably is the fact that the Governor said that farmers, herders and other non-state actors carry AK 47 rifles which is a statement of fact, and which to him is a thing of concern. Pundits have however turned what His Excellency said to a commodity to gain cheap political capital."

The group reiterated that His Excellency Rt. Hon. Simon  Lalong is a lover of peace and calling him names by disperaging him and quoting him out of context does not change the facts on ground, because the fact is that criminality knows neither tribe nor religion.

"We want to state unequivocally that there is a proliferation of arms in the hands of non-state actors who are not from one tribe or religion. There is therefore nothing wrong if the Governor averred that not only herdsmen, but others carry arms illegally. Can the critics of the Governor swear that only herdsmen commit violent crimes with AK-47 and other weapons? Who are those involved in kidnapping, banditary, robberies, destruction of farms, attacks on villages, killing of innocent people, cattle rustling and cultism? Are they from one tribe or religion? The statistics from the security agencies speak differently as people of different backgrounds are involved in crime."

While not supporting any crime and criminal conduct, denial of this fact amounts to treachery and a disservice to humanity in general. The concern so raised by His Excellency demands applause and support in order to rid our society of criminals rather than condemnation.

The tendency to own criminality has taken us decades backward and Governor Lalong is not ready to turn a blind eye from the truth because of cheap popularity.

The group asks those hyping the innocent but truthful comments of the Governor to calm down and allow common sense to prevail as not everything is politics and not all interventions of the Governor can be faulted by simple reason of sentiments and parochial interests.

Garba therefore uses the opportunity to call on all well‐meaning Nigerians to look at security issues dispassionately and curb it to the bearest minimum so that Nigeria can be salvaged.