Plateau state Governor Simon Lalong ,  on Thursday said that  his adminstration has  rehabilitated and reconstructed over 40 township roads within the Jos Bukuru metropolis under the “Operation Zero Potholes” which gave a lot of relief to our citizens.

Lalong made this known while speaking at  the 9th meeting of the National Council on Lands ,housing and urban development in Jos .

"This  Government in Plateau has  taken steps to providing more affordable and accessible housing for the teeming population ."

The Governor also  appreciated   President  Muhammadu Buhari, and the Minister of Works and Housing, Babatunde Raji Fashola (SAN), for citing key laudable projects in the State.

" Our people are earnestly awaiting the commencement of major projects including the Akwanga/Jos/Gombe Road, Jos/Zaria Road and the Ibi/Shendam/Lafia Road, Wase Bridge and others domiciled in the Ministry of Works and Housing. "

He said his adminstration recently  installed street lights across the city under the “Operation Light up Plateau” which has increased the beauty and safety of the city.

"On the whole, we have largely succeeded in restoring relative peace to the State which has attracted more and more people trooping into our state and taking advantage of the climatic conditions and peaceful atmosphere. "

He also vowed  that his  administration will implement the resolutions arising from the meeting that would guarantee affordable and accessible housing delivery within the purview of extant laws. 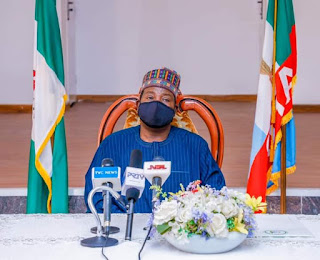