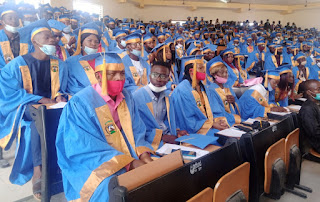 Speaking at the event  in Bokkos, the Vice Chancellor of the university, Yahanna Izam  said  attributed the delay in the conduct of exercise to the advent of Covid-19 and the strike recently embarked upon by the teaching staff of university.

The vice chancellor, who congratulated the matriculants, said over 5,000 applicants applied to study various courses in the university.

"The purpose of matriculation ceremony is to welcome into the fold our university, those who have been fortunate, based on the admission guidelines to make the list of successful candidates from the deluge of applicants who sought admission for the academic session.

"My dear students, you must count yourselves privileged to be among the 1,394 students to have made the successful candidates from well over 5,000 applicants.

"While I congratulate you for taking the oath that makes you bonafide students of this university, let me quickly warn that the oath is not a mere ceremony, but comes with enormous responsibilities,"he said.

The vice chancellor further warned the candidates against indiscipline, cultist activities, examination malpractice and other misconduct on campus, insisting that such move attracts outright expulsion.

Izam, who decried the increasing rate of indiscipline among some students of the university, called on the new students to be good ambassadors of their families.

"Of recent, indices of indiscipline among some of our students particularly those residing off campus has given us cause for concern.

"I, therefore, like to urge you to distance yourselves from joining any association whose motives and objectives are in conflict with accepted societal norms and values throughout the duration of your studies.

"This University will not only frowns at, but will penalise any students who indulges in cult activities, examination malpractice and any form of deviant behaviour.

"You must therefore live above board and your conducts most conform to the university's norms and values which will in the long run assess you both in character and learning,"he said

The vice chancellor also called on the new students to be security conscious and urged them to desist from unecessary nightlife which has potentials of exposing them to grace danger.

He advised them to be wary of their environment and report any suspicious movements within their vicinities to security agencies for prompt response.

Izam seized the opportunity to thank the state government for its support to the university and assured that the institution would continue to work hard to justify such gesture.