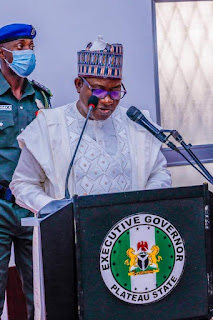 Plateau state Governor Simon Lalong on Sunday, appealed to the Church to continue to play its role by praying to God to unveil and bring forth godly persons that will vie and occupy various public offices.

Lalong made this known while speaking at the retirement service for outgoing Church of Christ in Nations COCIN President Rev Dacholom Datri and the induction of the New President Rev Amos Mohzo in Jos the state capital.

In his words "As we enter the period of politicking and draw closer to the 2023 General Elections, I wish to appeal to the Church to continue to play its role by praying to God to unveil and bring forth godly persons that will vie and occupy various public offices."

He also called on the church to carry out  sensitization of the citizens to be part of the political process and also participate to avoid leaving room for people of questionable character taking over leadership.

In his words "While we expect the Church to maintain its neutrality, it is expected that the Church will serve as the moral barometer to highlight some of the negative actions of the political class."

"We expect to have peaceful, transparent and credible elections which will only be possible when we come together to put the interest of our State and country above personal considerations.

Lalong also challenged the new COCIN leadership to immediately find a lasting solution to the issues that led to the suspension of the licence of the Karl Kumm University Vom."

We cannot allow years of toil and huge resources to go down the drain because of some obstacles that are normal challenges to great ideas. Government will be available to give you all the support you need to resolve the matter and have that institution take off without further delay.

The Governor also wished the outgoing COCIN President a very happy and restful retirement and also pray for the new President to have a fruitful tenure of service to God and humanity.

"During some of the most difficult moments in  the State, the Church was resolute in ensuring that ugly situations are brought under control within the shortest time possible. This has been possible through the support and collaboration of Church leaders like Rev. Prof. Dachollom Datiri who has worked tirelessly with leaders of other denominations to ensure that we restore Plateau to its true status as the Home of Peace and Tourism.

"As we witness this change of leadership, I wish to remind the Church of its very important role in our society as the beacon of hope and righteousness. We are in a critical moment in history where the entire society is in need of direction and redirection to godly virtues. Indeed our Lord Jesus Christ forewarned us that at the end times, there will be tribulations of various magnitudes."