AFCON 2022: NIGERIA MAINTAINS STREAK WINS THROUGH TO KNOCK OUT STAGE ROUND OF 16 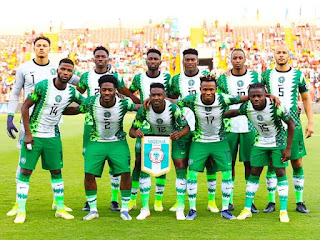 With the group stage of the 2022 Africa Cup of Nations closing up, only 16 of the original 24 teams remain standing, as eight teams headed home.

All the first-place and second-place finishers of the group stage qualified for the knockout round, while the four best third-placed teams made it through to complete the field of 16 teams.

Shockingly, African powers Ghana and Algeria were both eliminated in the group stage. For Algeria, the defending champion fell flat in its title defense, while Ghana failed to reach the knockout round for the first time since 2002. On the flip side, Cape Verde advanced to the knockout stage for just the second time in the nation's history, following up its 2013 showing when it reached the quarterfinals.

Tiny Comoros also moved on in its first-ever appearance at the AFCON tournament. It was the final team to make it through as a third-place finisher, with Sierra Leone and Guinea-Bissau missing out.

Hosts Cameroon, en route to winning Group A, scored the most goals of the group stage with seven, while Senegal completed its charge to the top of Group B without conceding a single goal. Nigeria finished with the most points, a perfect nine-of-nine after winning all three matches with a +5 goal differential, the best in the tournament so far.

Below is the complete knockout stage round of 16 fixtures;