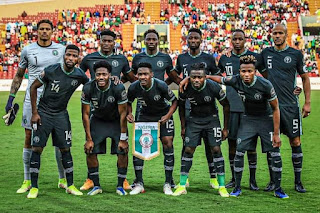 All is set, eyes wiggle as three-time African champions Nigeria will be seeking their second win at the on-going Africa Cup of Nations Cameroon 2021 when they slug it in with Sudan’s Falcons of Jediane tomorrow at the Roumde Adjia Stadium in Garoua.

A few hours after Nigeria beat Egypt 1-0 to open their Africa Cup of Nations (AFCON) campaign, the other two teams in Group D, Guinea-Bissau and Sudan played out a goalless draw to complete the first round of matches for that group.

With those results, the Super Eagles currently top Group D with three points, Sudan and Guinea Bissau have a point each while Egypt with no points are bottom of the group.

This means that Nigeria may book a place in the round of 16 if she wins the next game against the Falcons of Sudan and the result in the other fixture (Egypt versus Guinea-Bissau) is favourable.

Nigeria has a better head to head against their North African foes. In 14 games played between both sides since their first meeting in 1963, the West Africans have won eight times, drawn four times and have lost just twice to the Falcons of Sudan.

Interestingly, Nigeria’s 2021 AFCON group almost replicates the first tournament that Nigeria participated in. In the 1963 edition, the Red Devils (as the Nigeria national team was then called) were grouped with United Arab Republic (now Egypt) and Sudan. The Jorge Augusto Pena-led team lost their opener 6- 3 to UAR and the Brazilian’s side were walloped 4-O in their second group match against Sudan .

The next three games between both countries ended in a draw then Nigeria recorded her first win against Sudan in a 2-1 victory in a 1973 AFCON round 1 qualifying match at the National Stadium, Surulere. Nigeria would go on to dominate any clash with the Sudanese, including a 7-0 aggregate 2002 World Cup qualifying win in 2001. A brace from Victor Agali and one from Nwankwo Kanu gave Johannes Bonfrere’s team a 3-0 win at the Liberation Stadium Port-Harcourt before Yakubu Aiyegbeni (two goals), Austin Okocha and Julius Aghahowa humilated their Sudanese hosts in front 25 thousand fans in a cold evening at the El Merreikh Stadium, Omdurman.

Nigeria would then lose 1-0 to Sudan in an 2015 AFCON qualifier in Khartoum but would take a 3-1 win in the reverse fixture at the National Stadium (Moshood Abiola National Stadium) Abuja.

The last meeting between both sides was a 1-0 win for Gernot Rohr’s home-based Super Eagles at the African Nations Championship (CHAN) Semi-final, Stade de Marrakech, Marrakech, Morocco in 2018.

For Burhan Tia, the head coach of Sudan, facing the three-time AFCON champions is always a tough task but says his young team is preparing well and knows how they would approach the must-win match.

“It will not be easy, as well as facing Egypt, but these are matches that we have put in our minds and our program before the tournament,” the veteran coach said.

Nigeria’s players, on the other hand, have vowed to maintain their winning momentum.

Kelechi Iheanacho, who posted a man of the match performance against the Pharaohs of Egypt, revealed that the Super Eagles will not let their chances go to waste as against their opening match where they failed to convert a flurry of chances against the hapless Egyptians.

“I feel great, I’m really buzzing about getting the goal for my team,” Iheanacho said. “We missed some goals in the second half but hopefully next game we pick up the pieces and convert our chances.

“Our team is always a confident team, we have a very intelligent group of players, and we are really vibrant and strong,"

“We have been together for a while and we work together as a team”.

First choice goalkeeper, Maduka Okoye said he expected  the Sudanese clash to be a physical battle, but is sure that the team’s quality will be enough to defeat the one-time African champions.