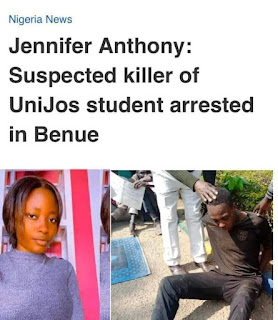 It is common knowledge that Justice delayed is Justice denied, the remains of the murdered Miss Jenifer Anthony may have been put to rest amidst anguish by family, friends and loved ones, but her spirit and soul still yarns for Justice.

1. Over two weeks after this case was bloated and suspect paraded by the Nigerian Police Force Headquarters here in Jos, Mr MOSES OKO has neither been charged to court nor has he been properly handed to the Police authorities detention system, as he has been recieving treatment and relaxing in the Pchychiatric Department of Jos University Teaching Hospital (JUTH), on pretence of mental health which was only reported after he had allegedly committed the said crime, what an irony.

2. It is a point to note that such heinous crime can never be committed without an organize accomplice network, which the police hasn't uncovered nor identified to the best of the knowledge and information available within the media space.

3. A sibling to the accused, one Miss ENE OKO, has profusely sent dead threats to but online bloggers and journalist on WhatsApp with the number herein; 0814 901 7444.

Journalist have just but a goal which is making sure Justice is served in this case to a logical conclusion, but rather she has repeatedly said, boostfully that "for Naija case na money" which establishes for a fact that money has definitely exchanged hands within the prism of law enforcement as well as the Justice system as the case maybe.

4, Within less than a week after the crafty father to the accused, one Mr JOSEPH OKO, was released from police detention due to possibility of absconding as he is a flight risk, he was seen gallivanting in a latest edition Hilux SUV worth over N20 million which is suspected to have been purchased by him from proceeds of crime committed by his wicked and inhumane son.

We are all aware of the possible salary scale of a Senior Lecturer within the Federal University system and also we are well aware that Within the means of income of Mr JOSEPH OKO he cannot dream of acquiring such a luxury, this in fact has made him an accessory to murder in many facets.

5. After the above established facts, it is our prayer that the UNIVERSITY OF JOS, SENATE consider the following recommendation to maintain it's reputation and reassure parents and wards of there 100% safety within the University community;

i. An ethics community should be set up to look into the facts and fallacies of this case, probe both the parents of the accused.

ii. The full course of the law should gravitate on  both the Father who is an employee of the institution and the son who is also a student, if the are both found gullible in any way regarding the murder of Miss Jenifer Anthony.

iii. All operational certification issued to the accused father be suspended, pending the outcome of the findings by the established committee.

iv. Further proactive measures should be established and recommended to curtail further occurrences.

6. Finally this is a call to all asundry to rally round in support of Justice, arresting and prosecuting such dastardly act can prevent or save another person's child, sister, cousin, nephew, etc from been the next victim...

While the family the accused, Mr MOSES OKO are comfortably living within there household of kassamines, Gamajigo along Bida Bidi of Zaria Road, Jos North, Plateau State, Nigeria. like it is business as usual the buried body of Miss Jenifer Anthony returns to mother Earth without her eyeballs...

if really there is an iota humanity in us, we should all agitate Justice for late Miss Anthony Jenifer.

Please share and comment till we go viral in search for total Justice for the victim and many others uncovered.