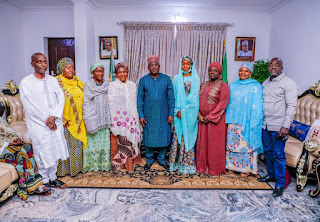 Governor Simon Bako Lalong has eulogised frontline First Republic politician, Chief Michael Audu Buba, Wazirin Shendam, who he said played a key role in the emergence of democracy in Nigeria and opened doors for many politicians in Plateau, the Middle Belt and Northern Nigeria.

During the nation’s independence era, he was variously appointed as the Northern Region’s Minister of Trade and Industry, as well as the Minister for Social Welfare and Cooperatives where he served creditably.

Lalong said the late political heavyweight played a key role in launching the then Plateau State into the political landscape of the Northern Region and Nigeria, as well as fought for rights of the people.

He told the family that the Government will ensure that his labour and sacrifice do go unrecognised by ensuring that he is given proper honour in Plateau State, the Northern Region and Nigeria at large for the role he played in the democratic journey of the country.

He urged the family to sustain the legacies of their father and also participate in politics in order to influence the lives of people like their father did during his time on earth.

Responding, a son of the late politician, Musa Michael Buba said they were happy for the invitation by Governor Lalong who is also the Chairman of the Northern Governors Forum, saying they remain proud of what their father did to mentor many young politicians and technocrats who have become great people in Plateau State and Nigeria as a whole.

He said the family appreciates the goodwill of Governor who has decided to give their father proper recognition and honour, many years after his death.

Michael Audu Buba, a prominent member of the National Party of Nigeria (NPN) in Plateau State, was also an official member of the Northern People’s Congress (NPC) having served as the party’s regional secretary, Northern Region.

He was born in 1924, and hailed from Shendam Local Government Area of Plateau. He worked with the Lowland Native Authority as a Secretary and Councilor before he was elected into the Northern House of Assembly in 1951, and later became a member of the Nigerian House of Representatives in 1952.

Director of Press & Public Affairs to the Governor of Plateau State