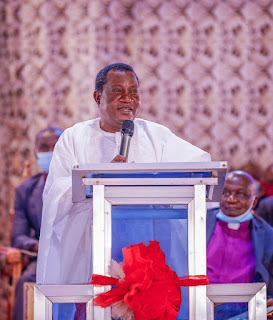 Governor Lalong while speaking at a funeral service for the deceased traditional ruler held at the Church of Christ in Nations (COCIN) Kerang, said the Royal Father was man of peace who did a lot to promote peaceful coexistence and tolerance within his domain and in the entire State.

He said "Our father did his best and served with all his might and strength. He was a man who loved peace and did everything possible to encourage unity, love and tolerance among all citizens within and outside his domain, irrespective of their tribes, religion or political affiliations. He did not discriminate against people, but brought them together".

The Governor Governor described him as a very reliable ally of Government particularly at difficult times when enemies of the State attempted to disrupt public peace. His proactive approach enabled Government to nip the situation in the bud and sustain security of lives and properties. Criminals had no hiding place within his domain as he mobilized his subjects to be vigilant and cooperate with security agencies in flushing them out.

While asking the family and the Mwagavul nation to bear the loss and sustain his legacies, Lalong said the late monarch will be remembered as a man of honour who paid very close attention to the economic prosperity of his people. Apart from being a farmer himself, he encouraged the people to also work hard and engage in farming and other business activities.

The Governor also appealed to the Mwagavul traditional Institution to unite and put the interest of the Chiefdom above personal gains particularly during the election of a successor, assuring that the Government will not interfere in the process in line with the stance of the Rescue Administration to allow justice and fairness to prevail.

Gbong Gwom Jos and Chairman, Plateau State Council of Chiefs and Emirs Da Jacob Gyang Buba, extolled the virtues of the late Royal Father, describing him as a very jovial, intelligent and constructive personality who made valuable contributions to the decisions of the Council.

He also appealed to the Mangu Traditional Council to avoid anything that will bring disharmony and hatred in the choice of a successor to the late monarch, urging them to abide by the laid down procedures spelled out in the Gazette.

COCIN President Rev. Dr. Amos Mohzo said the late Mishkaham Mwagavul was a believer in Christ who supported the Church and also depended on God for wisdom during his reign.

He asked the family and sympathizers to always think about eternity in all their activities as death is inevitable and cannot be avoided by anyone no matter his status.

Widow of the deceased, Na Monica Bakfur, and his son, testified that their late father was a man of integrity, love and forgiveness who paid attention to his family as well as the people of the Chiefdom.

Several other speakers affirmed that the late monarch was a man who loved education and supported the establishment of schools within his domain by both Government and the private sector.