INSECURITY: GOVERNOR LALONG DECRIES ATTACKS ON TRADITIONAL RULERS; SAYS IT'S AN ATTEMPT BY CRIMINALS TO COW THEM 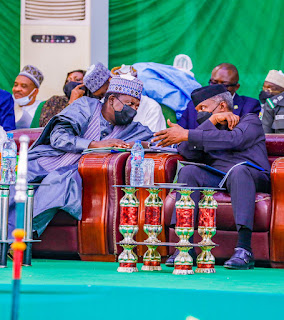 Plateau  State Governor and Chairman, Northern Governors Forum, Simon Bako Lalong has decried the upsurge of attacks on traditional rulers in Nigeria saying it is an attempt by criminals to intimidate them agaunst exposing crimes within their domains in order to totally subdue the entire population.

Governor Lalong who was speaking at the annual Sir Ahmadu Bello Memorial Foundation Lecture in Kano, said it was very worrisome to see that traditional rulers have become victims of kidnappings, murders and other violent attacks by criminals simply because they stand against their activities or mobilise their subjects to reject them.

Lalong who was the Chairman of the event said this development portends danger as the criminals seek to dominate the environment and dictate the affairs of society through criminality. This he said must be fought with vigour as criminals must be flushed out in every community.

Lalong said  "We condemn in strong terms this shameful and unacceptable act, and call on the security agencies to ensure that these incidences are dealt with swiftly. As Governors, we will activate all machineries to ensure that such persons and their sponsors are brought to book. Failure to do so will not only weaken the Traditional Institution, but also damage its reputation thereby making it incapable of contributing to finding lasting solutions to the lingering security challenges in the Northern Region and the nation at large. The result of insecurity is displacement, hunger and food shortages that have resulted from many farmers being unable to go to the farms to produce food. Therefore, all hands must be on deck to tackle the situation and give our people the confidence and guarantee to pursue their means of livelihood without fear of harassment, molestation or death"

He also frowned at allegations that finger some Traditional Rulers of aiding and abetting criminals. These he said are serious allegations that should be investigated and dealt with so as to safeguard the integrity, sanctity and dignity of the revered Institution. Such Traditional Rulers if found culpable should be held responsible for breach of peace and security in their domains and sanctioned appropriately according to law.

Vice President Yemi Osinbajo said the late Sardauna Sir Ahmadu Bello remains an icon for his foresight and ability to carry along all segments of society including the traditional Institution in governance which led to major achievements recorded during his time.

He said the role of traditional rulers in tackling insecurity cannot be overstated because they play a crucial role in mobilising the people to address issues of concern in the society as well as set the tone for peaceful coexistence.

Osinbajo commended the organisers for keeping alive the memory of the late Sardauna whose influence touches many areas including empowerment, peace and security. This he said makes it more urgent for traditional rulers to be given recognition in the nation's governance architecture.

Kano State Governor Abdullahi Ganduje, former Governor of Niger State Muazu Babangida Aliyu, Sultan of Sokoto and other guests said it was hightime that the nation's royal fathers were given definite roles in the constitution because they have very crucial roles to play in assisting Government address the security situation that is threatening the stability of the country.

Speaking on the theme, “Reviving the Northern Traditional Institutions: Imperative for Peace and Security in Northern Nigeria.”, Guest Speaker Justice Sidi Bahe, Emir of Lafia said the issues of insecurity and other acts of criminality are largely characterized by unmitigated violence and crime made manifest through complex network of insurgency, kidnappings, sporadic attacks, terrorism, assassinations and armed robbery.

He said looking at the challenges of peace and security in Nigeria and the role expected of the Traditional Institution, there is the need to put them at the centre of decision making as they cannot operate in isolation to other variables which make up our society today.

We said the situation needs to be taken back to the days when the Institution had a direct participation in Governance particularly in the defunct Northern Region.

Awards we given to deserving individuals who have contributed to the development of the Northern Region and Nigeria at large.