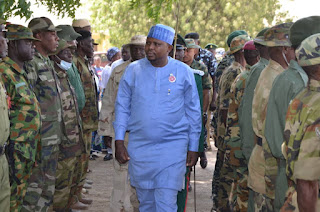 Executive Chairman of Langtang North Council of Plateau state Barrister Zulfa Rimven , on Saturday presided over the 2022 Armed Forces Remembrance Day in the Council in Langtang.

During Saturday’s ceremony which took place at the LGA,the Council boss Zulfa inspected a Guard of Honour .

The Council boss said the Nigerian Armed Forces have made sacrifices to not only keep Nigeria one.

Prayers were said for the peaceful repose of the souls of the dead and the health of the nation.

Zulfa later laid a wreathe on the Tomb of the Unknown Soldier as a mark of last respect to the fallen heroes who paid the supreme price to preserve the nation’s territorial integrity and peace globally.

He called on citizens of Langtang North to, as a mark of honour for the sacrifices of the men and women of the Armed Forces show more commitment to the unity of the nation and the task of building a better society.

The Council boss also called on the citizens of Langtang North to stay peacefully with one another and support the Simon Lalong led administration in the state .