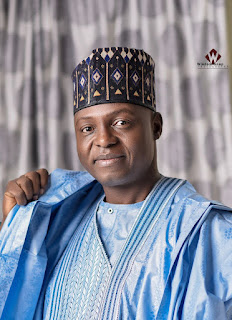 Less than 15 months to next year’s general elections, a Group  operating under the aegis of Plateau Youths for Good Governance has called on citizens of the State to support Dr Nentawe Yilwatda, the former Resident Electoral Commissioner (REC) for Benue State who has since accepted the numerous calls to offer himself to serve Plateau State.

The group further declared that there is no better candidate for the 2023 Governorship  election in Plateau than Nentawe.

In a statement made avail­able to journalists on Thursday in Jos, the pressure group led by Hon. Murphy Lazarus Gobus the Direc­tor-General of the Group, called on citizens of the State  to support the aspirant whose objective is to further transform the State.

Mr Yilwatda, a former engineering lecturer at the Federal University of Agriculture, Makurdi, was appointed REC in July 2017 and posted to Benue State.

During his four-year stay in office, he participated in the conduct of over six elections in Benue and other States such as Anambra, Osun, Rivers, Kogi and Cross River States where he delivered free and fair elections.

The group said that Dr  Nentawe Yilwatda has what it takes to consolidate on the achievements of not only Governor Simon Lalong but all other Governors before him.

Lazarus Gobus further described Dr Nentawe  as what Plateau needs at the moment as he did so well in all tasks he had handled in the past.

He stated that Yilwatda has good political antecedents ,"No doubt, Nentawe has the pedigree to make Plateau  one of the best and most developed states in the country."

"As a group we are postive ,he would turn around the fortunes of Plateau if given the mandate."

It is true that there are other contestants vying for the gubernatorial slot but I can assure Plateau citizens  that Nentawe is the man to beat in next year’s elec­tion,” he said.

He  explained why the people of the state should support Nentawe adding that Plateau citizens need him to improve on the laudable achievements of Governor Simon Lalong .

The group further added that if elected  Dr Yilwatda would deploy technology to secure Plateau,

" I recall that as at then Resident Electoral Commissioner in Benue State, Dr Nentawe Yilwatda  was able to organize and conduct the most peaceful election in the history of Benue State  in spite of  the preemptive red flag warning issued by United Nations Organization of a possible bloodbath in the 2019 elections in Benue State.

"How did he achieve this? Being an Associate Professor of Artificial Intelligence, he personally developed an application that was sensitive to all Tiv, Idoma, Hausa, Igede and English phrases that connotes violence and deployed them on all local Networks which successfully identified, tracked and disconnected all communications by individuals speaking vocabularies that are suggestive of violence."

This was how all political thugs and their sponsors were disconnected and put in total disarray. The result? There was sanity in the polity and for the first time in the history of elections in Nigeria, over five political parties won seats to both National and State Assemblies in Benue State without an incident of violence.

As a group we call on Dr Nentawe Yilwatda to contest the 2023 Governorship election as the people of the state are solidly behind him ,the statement further added.