Plateau to partner with organization for enhanced eye health program 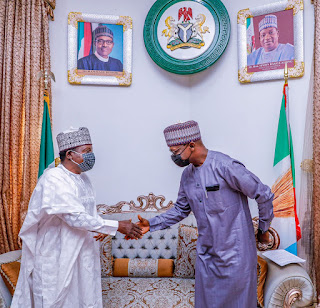 Plateau State Government is to partner with Sightsavers, an international organisation in establishing a comprehensive eye health program throughout the State.

Governor Simon  Lalong stated this while receiving the Country Director of Sightsavers Nigeria and Ghana, Dr. Sunday Isiyaku at the Government House Jos.

He said the partnership is based on his earlier visit to the United Kingdom where he interacted with the global leaders of the organisation and a subsequent request for the partnership which is aimed at addressing the challenges of eye health in Plateau State particularly in the rural areas.

Lalong said one of his passions is to see that people who are living with disabilities in any form get assistance and reprieve through deliberate steps such as the one being taken in the partnership with Sightsavers.

He thanked the team for the visit and assured them that the Plateau State Government was ready to play its part in the partnership by paying its counterpart funding and also making facilities and personnel available for training and actual operation.

Earlier, Country Director Sightsavers Nigeria and Ghana Dr. Isiyaku said they were in Plateau on the directive of the global office which responded to the communication sent to it by the Governor for partnership.

He said a three year partnership is being proposed and will support the establishment of a State owned comprehensive eye health program that is well coordinated, accessible, affordable and sustainable based on national policies and guidelines for the over 4 million people of Plateau State.

Dr. Isiyaku said in 2021, a survey was carried out which showed that there was a significant gap in eye health in Plateau State which needs to be addressed immediately to save many citizens from going blind. This he said will involve manpower training, improvement of infrastructure and advocacy.

The Country Director asked the Governor to approve health facilities in the Central and Southern Zones; commit to pay counterpart funds; fund budget lines for eye health; and work towards improving the human resource in the eye health sector.

Head of the Christoffel Blinden Mission (CBM) also assured the Governor that they will partner together with Sightsavers to achieve the mission.