The perturbing story of Hanifa; I am very very sorry for what I did to them - Proprietor 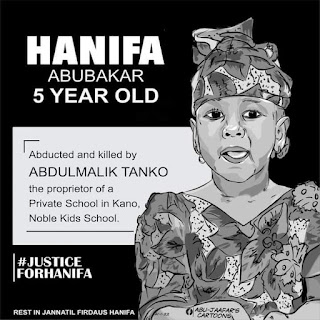 The story of Hanifa who was kidnapped since December last year on her way from school has giggled in the mouth of many sympathizers.

Revelations has it that Tanko the proprietor of her school, kidnapped her and had demanded a N6 million ransom from the parents of the child and in the process of collecting part of the money, he was arrested.

He had failed to disclose that the victim had been killed.

“I have three daughters…I seriously have regrets, even the moment this girl was dying, I was in shock. It was financial crisis that made me do it" I am owing landlords.

“This is a life, a life is something precious. I’m aware of all the laws.”

He also narrated how he killed the innocent child and said he used N70,000 from the N100,000 collected from Hanifa's parents as part of ransom demanded to settle part of his staff salaries.

Details into this case will be followed meticulously to a logical conclusion, may the good Lord grant her soul eternal rest...Amen