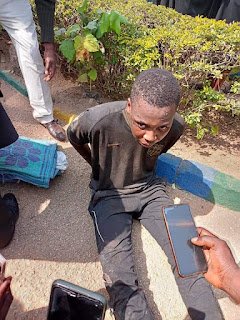 How Moses Oko's parents played a major Role in His escape Attempt.

The case of Jennifer's death is no new news to anyone who is active on the social media space, We just received a clearer version of the attempt of the Prime suspect of the murder to escape.

A nurse who happened to work in the hospital where his parents brought him as a person with psychological issues made the shocking revelation.

For now the Nurse and the narrator's identity will be undisclosed.

Here is what They had to say,

We all heard that Jennifer's killer has been arrested right? Well it happened here in benue state teaching hospital,my neighbor who happens to be a psychiatric nurse told us the story this morning. According to her,his father,a professor in unijos and his mother brought him to the hospital with false information,there were bruises on his body and when they asked, they said he hit someone with his car and the person died so people there were beating him,they also claimed he was m.ad. So they ignorantly took him in,infact this woman was the one attending to him and she didn't know he was a criminal. She said about three days ago,he tried to escape from the hospital with a chain,he was using the chain to hit anyone who tried to stop him , meanwhile,his parents were in the hospital that day and they did nothing. A certain Mr ola, who's also a nurse pursued him with a bike,then they got to a roundabout and that was where he was pinned down and chained and taken back to the hospital. They still thought he was ma.d but they became suspicious on why he tried to escape,they confronted his parents for not doing anything when he tried to escape and according to her,the father tried to bribe them which they refused. They now held a meeting to discuss the whole thing and concluded something was wrong.

The next day,police from Jos came to the hospital,they said on the day that the guy tried to escape,the father reported himself to the police because Jos police locked down their house in Jos and he knew he had nowhere to run...so their plan was for him to escape,then the police would come looking for him and wouldn't find him and blame it on the negligence of the nurses.