Showing posts with the label New
Show All 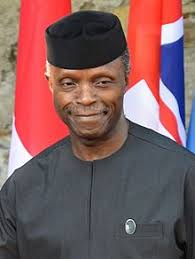 Seeks dismissal, prosecution of NEMA DG Maihaja over fraud, corruption and embezzlement of N33 billion emergency intervention fund In contravention of constitutional provisions, Vice President Yemi Osinbajo illegally approved the release of the sum of N5, 865, 671, 939.26 in June 2017 from the Consolidated Revenue Fund Account which was mismanaged by the National Emergency Management Agency (NEMA), a report by the House Committee on NEMA has stated. The report, whose recommendations were based on findings from a thorough investigation by the Hon Ali Isa J.C House Committee on Emergency and Disaster Preparedness was adopted by the House of Representatives after being considered in the Committee of the Whole Thursday. The House noted that the authorisation of the release of the fund for emergency food intervention of food security in the North East contravenes Section 80(4) of the 1999 Constitution as amended states that, “No money shall be withdrawn from the Consolidated Reve
Post a Comment
Read more
More posts